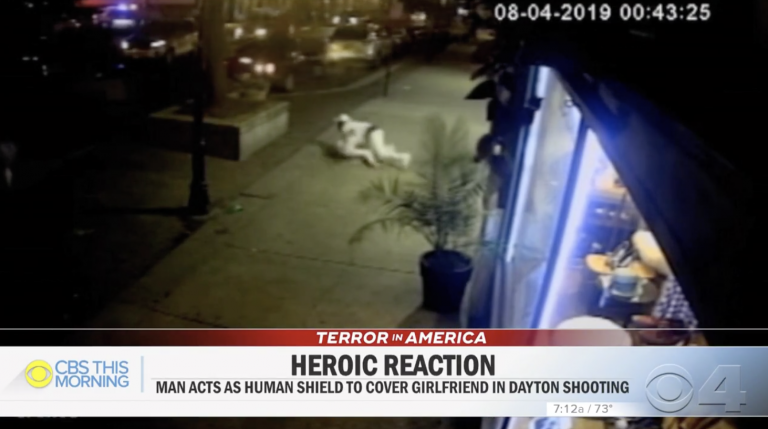 Camryn Crowder grabbed his girlfriend and fell to the floor on Sunday as a gunman shot up a popular area for nightlife in the Ohio city just yards away. He can be seen in video clips holding onto the woman as others attempt to flee from the scene.

“I saw people getting hit. I literally saw them fall,” Mr Crowder said. “I was certain that I was going to be next in line, really, at some point.”

Mr Crowder can be seen at one point moving his girlfriend towards a section of the sidewalk that appears to be partially walled off, while steadily checking to see if the shooter was still nearby.

He later helps his girlfriend up and the two quickly escape when the scene is clear.

Police said Connor Betts killed nine people when he unloaded his weapon on the Dayton street, before he was eventually shot and killed by responding officers.

“It was just a trail of bodies laying there,” Mr Crowder recalled. “I had seen about four people that had gotten hit. Laying on the sidewalk and in the middle of the street.”

Mr Crowder and his girlfriend both were unharmed during the mass shooting, which was just one of two back-to-back incidents nationwide over the weekend.

In another reportedly unconnected attack, a gunman opened fire at a Walmart in El Paso, Texas on Saturday after posting an anti-immigrant manifesto to the online messaging board 8chan.

Mr Crowder described himself in the interview released Thursday as “one of the lucky ones,” saying he was saved by “the grace of God”.

The Question For 2020: Can Fundamentals Ramp Up Before Policy Fades

NewsWatch: Value stocks are making a comeback, and here’s how to get in early

Mitsuoka Motor gets ready to rock