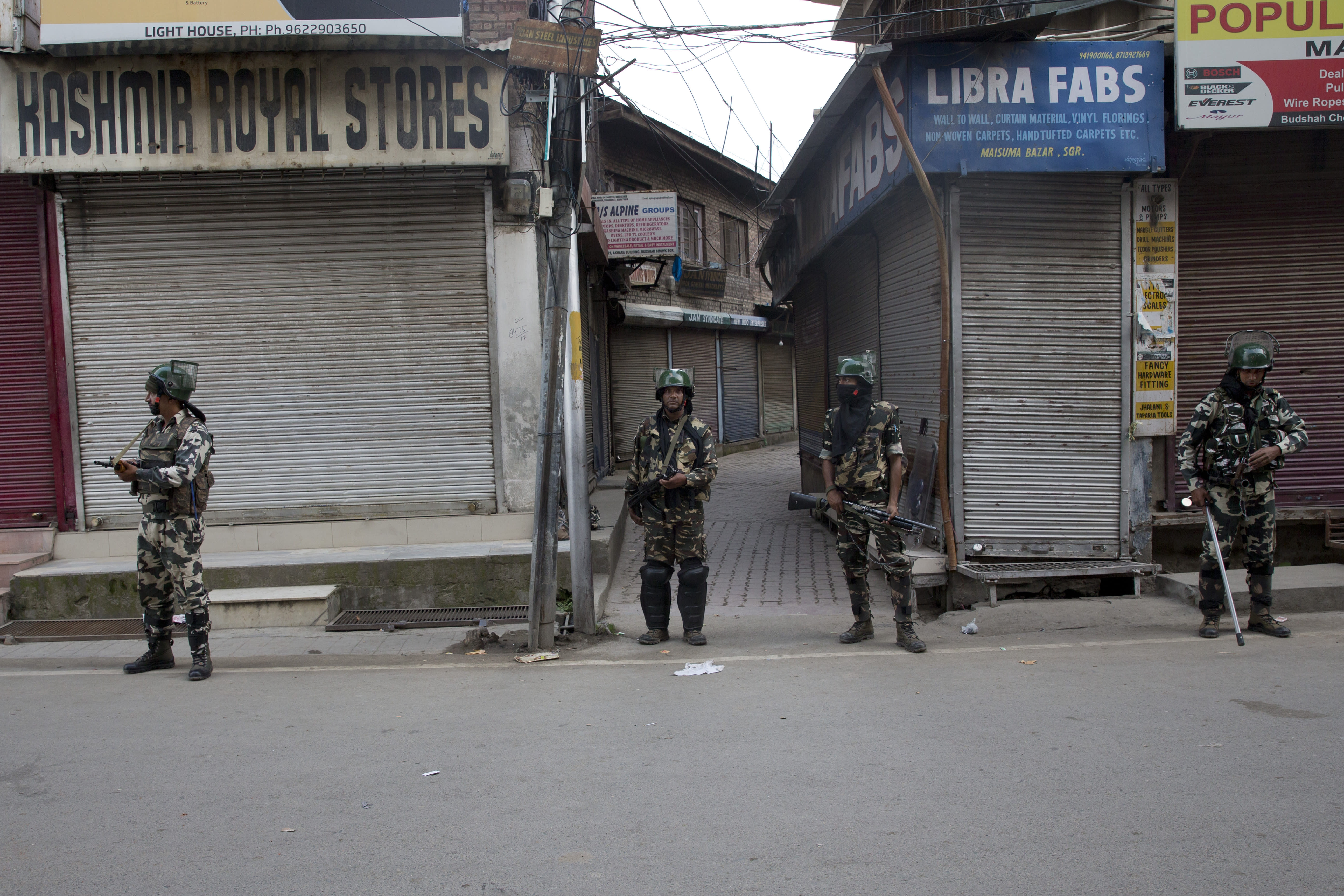 In this Tuesday, Aug. 6, 2019 photo, Indian paramilitary soldiers stand guard during curfew in Srinagar, Indian controlled Kashmir. The lives of millions in India’s only Muslim-majority region have been upended since the latest — and most serious — crackdown followed a decision by New Delhi to revoke the special status of Jammu and Kashmir and downgrade the Himalayan region from statehood to a territory. Kashmir is claimed in full by both India and Pakistan, and rebels have been fighting Indian rule in the portion it administers for decades. (AP Photo/Dar Yasin)

NEW DELHI (AP) — Indian Prime Minister Narendra Modi told the nation Thursday night that he stripped the Indian-controlled portion of Kashmir of its statehood and special constitutional status to free the disputed region of “terrorism and separatism.”

Kashmir is claimed in full by both India and its archrival Pakistan, although each controls only a part of it and rebels have been fighting Indian rule in the portion it administers for decades. This week, India downgraded the Himalayan region from statehood to a territory, limited its decision-making power and eliminated its right to its own constitution.

In his first nationally broadcast speech on the decision, Modi described the changes for Jammu and Kashmir, as the region is formally known, as historic. He assured its residents that the situation will soon “return to normal gradually,” although he gave no specifics.

He accused neighboring Pakistan of using the past arrangement “as a weapon to incite people of the region against India.”

“I have complete faith under this new system we all will be able to free Jammu and Kashmir of terrorism and separatism,” Modi said, referring to ending the region’s special status granted under Articles 370 and 35A of India’s Constitution.

Those provisions “gave Jammu and Kashmir nothing but terrorism, separatism, dynasticism and large-scale spread of corruption,” and they were “used as a weapon by Pakistan to incite anti-national feelings against some people in our country,” he said.

Modi added: “This heaven on earth, our Jammu and Kashmir, will once again reach new heights of development and attract the whole world toward it. Ease of living will increase for our citizens. Citizens will receive all the benefits they deserve without any obstacles or challenges.”

Pakistan said it would downgrade diplomatic ties with New Delhi, expel the Indian ambassador and suspend trade and a key train service with India. Prime Minister Imran Khan told his National Security Committee that his government will use all diplomatic channels “to expose the brutal Indian racist regime” and human rights violations in Kashmir, a government’s statement said.

Pakistani Foreign Minister Shah Mahmood Qureshi said Islamabad is not considering any military action, looking instead at its political and legal options.

U.N. Secretary-General Antonio Guterres urged India and Pakistan to refrain from taking any steps that would affect the status of Kashmir. U.N. spokesman Stephane Dujarric said Guterres “is also concerned over reports of restrictions on the Indian-side of Kashmir, which could exacerbate the human rights situation in the region,” and reiterates his call for “maximum restraint.”

State-run All India Radio, which reported on the arrests without details, also said that cross-border firing by Indian and Pakistani troops hit the Rajouri sector of the Indian-controlled Kashmir late Wednesday. Many people there remain holed up in their homes.

Activist Ali Mohammed told broadcaster New Delhi Television that he organized ambulances to carry sick poor people to hospitals in Srinagar, the main city in India’s portion of Kashmir, since they can’t even use phones to seek medical help.

Modi’s national security adviser Ajit Doval visited the region Wednesday to assess the law and order situation in the country’s only Muslim-majority state where most people oppose Indian rule. The insurgency that began in 1989 and India’s ensuing crackdown have killed more than 70,000 people.

A petition challenging the lockdown was filed in India’s top court. Opposition Congress party activist Tehseen Poonawalla said he expected the Supreme Court to hear his petition seeking the immediate lifting of the curfew and other restrictions in Kashmir, including blocking of phone lines, internet and news channels.

He also sought the immediate release of Kashmiri leaders who have been detained, including Omar Abdullah and Mehbooba Mufti.

India said it regretted Pakistan’s steps and said in a statement that “the intention behind these measures is obviously to present an alarming picture to the world of our bilateral ties.”

The External Affairs Ministry said it was not surprised by Pakistan because Islamabad “has used such sentiments to justify its cross-border terrorism.”

Describing India’s latest steps in Kashmir as an internal matter, the statement urged Pakistan to review its decision so that normal diplomatic channels are preserved.

Pakistan’s Foreign Ministry spokesman Mohammad Faisal said authorities were considering a proposal to approach the International Court of Justice over India’s action. He condemned the imposition of communications blackout and security clampdown, saying “Kashmir has been converted into the world’s biggest jail” by India by forcing people to stay home.

“They are taking such actions in a panic,” he said. “They have touched something they don’t know how to get out of.”

Faisal said even the Indian opposition and media were against the moves in Kashmir.

He said Pakistan had never shut doors for talks with India in the past but India never positively responded to such offers from Islamabad. “Only they can say what they want now,” he said.

The government in Islamabad also said it would give diplomatic, political and moral support to people living in Kashmir and their “right of self-determination.” It also said it would ask the U.N. to pressure India to reverse its decision.

An uneasy calm prevailed along the Line of Control in Pakistan’s part of Kashmir, where people in border villages were awaiting government instructions to move to safer places, although some residents had already gone to nearby towns.

Key Words: Klobuchar enthuses over the Times endorsement — just not the New York Times one